Characters, items, game modes and locations based on Riot’s new animated series, Arcane, will come to Erangel along with new gameplay elements in PUBG MOBILE Version 1.7

LOS ANGELES – November 2nd, 2021 – Today, PUBG MOBILE, one of the world’s most popular mobile video games, and game developer and publisher Riot Games, have announced a partnership to bring characters, items, and locations from its upcoming series, Arcane, into PUBG MOBILE. The updates will begin releasing in Mid-November as part of its Version 1.7 update, giving fans unique new experiences in one of Riot’s first partnerships to bring the world of League of Legends to more players worldwide. 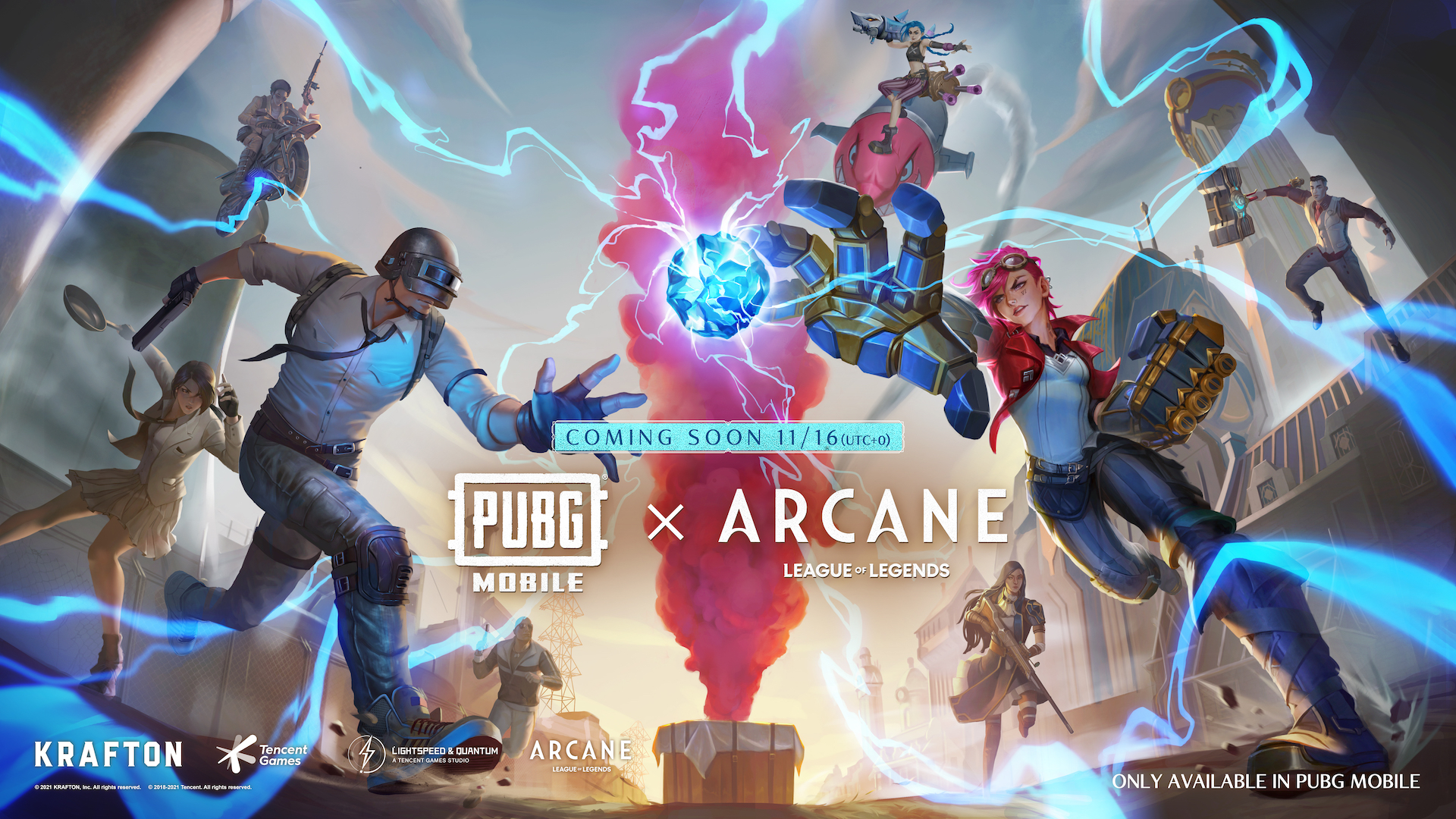 Vincent Wang, Head of PUBG MOBILE Publishing, Tencent Games: “We’re extremely excited to be partnering with Riot Games to celebrate its first ever League of Legends animated series. Runeterra is one of the most beloved universes in gaming, and to be able to bring that magic to PUBG MOBILE while also supporting the release of Arcane is an amazing opportunity. We’ve got a lot in store for our players with the Version 1.7 update, including some completely new gameplay features we’ve never experimented with before, so we can’t wait to show off more.”

Brandon Miao, Cross-Product Experiences and Partnerships Lead, Riot Experience (XP) at Riot Games: “PUBG MOBILE is a beloved game that has been embraced by players around the world. We value partners that nurture communities of shared play with a deep commitment to developing exciting new content to delight players. We look forward to bringing an authentic celebration of Arcane to Erangel.”

Arcane, created by Riot Games in partnership with Fortiche Productions, will debut on Tencent Video in China and Netflix globally on November 6th at 7pm PT. The first TV series based on the League of Legends universe, the show will follow the origins of two iconic League champions, and the power that will tear them apart.

In each game update, PUBG MOBILE provides new, interesting, and engaging content to its players, through partnerships with key entertainment properties in movies and gaming as well as collaborations with musicians, celebrities and more. This is the first partnership between PUBG MOBILE and Riot Games and will also bring new game areas and gameplay modes inspired by Arcane to the world of PUBG MOBILE. 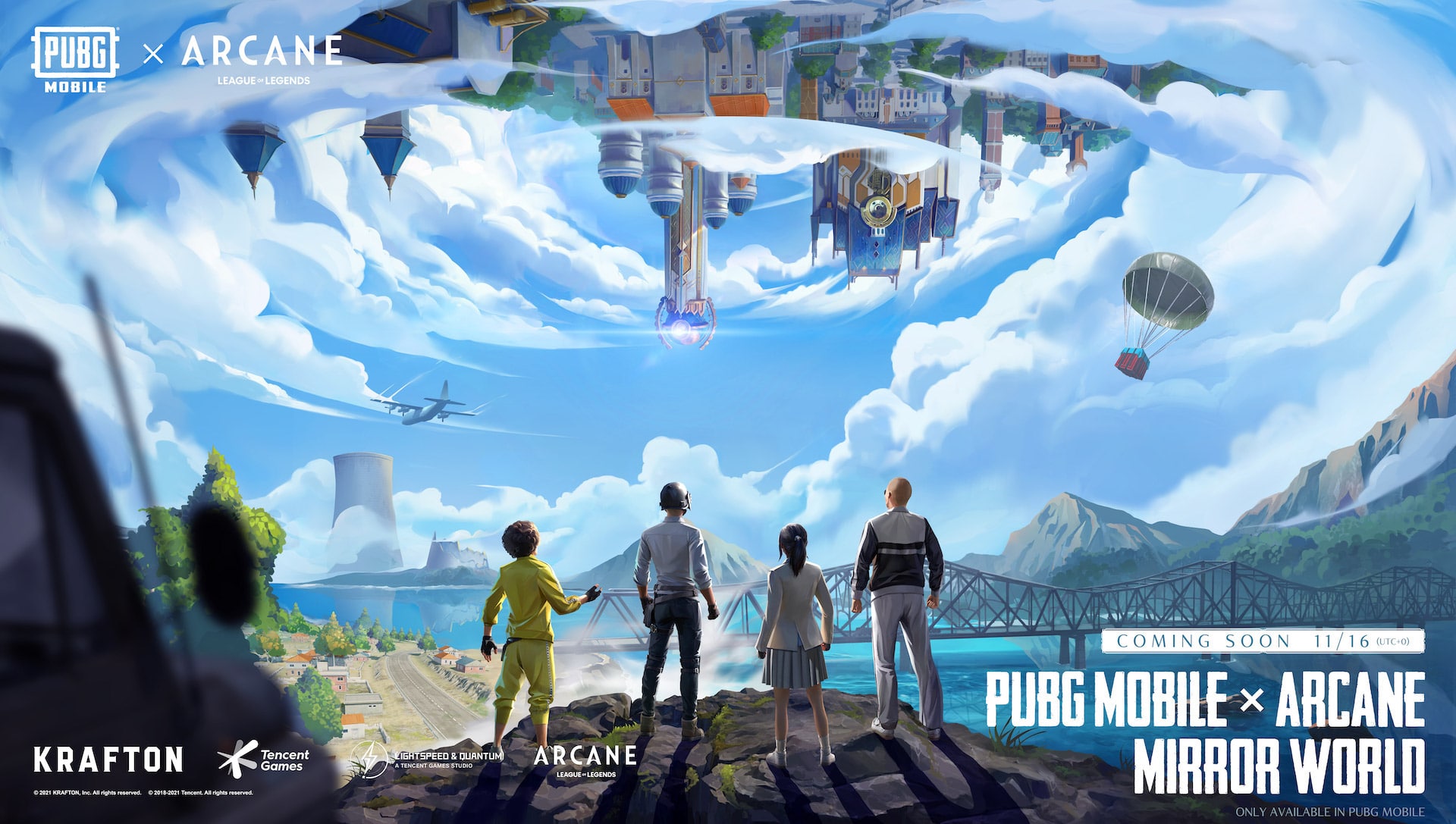 ​​PUBG MOBILE is available to download for free on the App Store and Google Play Store.

PUBG MOBILE is based on PUBG: BATTLEGROUNDS, the phenomenon that took the world of interactive entertainment by storm in 2017. Up to 100 players parachute onto a remote island to battle in a winner-takes-all showdown. Players must locate and scavenge their own weapons, vehicles, and supplies, and defeat every player in a visually and tactically rich battleground that forces players into a shrinking play zone.

Riot Games was founded in 2006 to develop, publish, and support the most player-focused games in the world. In 2009, Riot released its debut title, League of Legends, to worldwide acclaim. League has gone on to be the most-played PC game in the world and a key driver of the explosive growth of esports.

As League enters its second decade, Riot continues to evolve the game while delivering new experiences to players with Teamfight Tactics, Legends of Runeterra, VALORANT, League of Legends: Wild Rift, and multiple work-in-progress titles, while exploring the world of Runeterra through multimedia projects across music, comic books, TV, and more.

Founded by Brandon Beck and Marc Merrill and led by CEO Nicolo Laurent, Riot is headquartered in Los Angeles, California, and has 3,000 Rioters in 20+ offices worldwide.

Netflix and Riot Games bring the global phenomenon League of Legends franchise to television with the animated event series Arcane. The series will also be available on Tencent video in China and marks Riot Games’ first series for television. Set in Riot’s globally popular League of Legends IP, Arcane is an animated series developed and produced by Riot Games in partnership with Fortiche Productions.