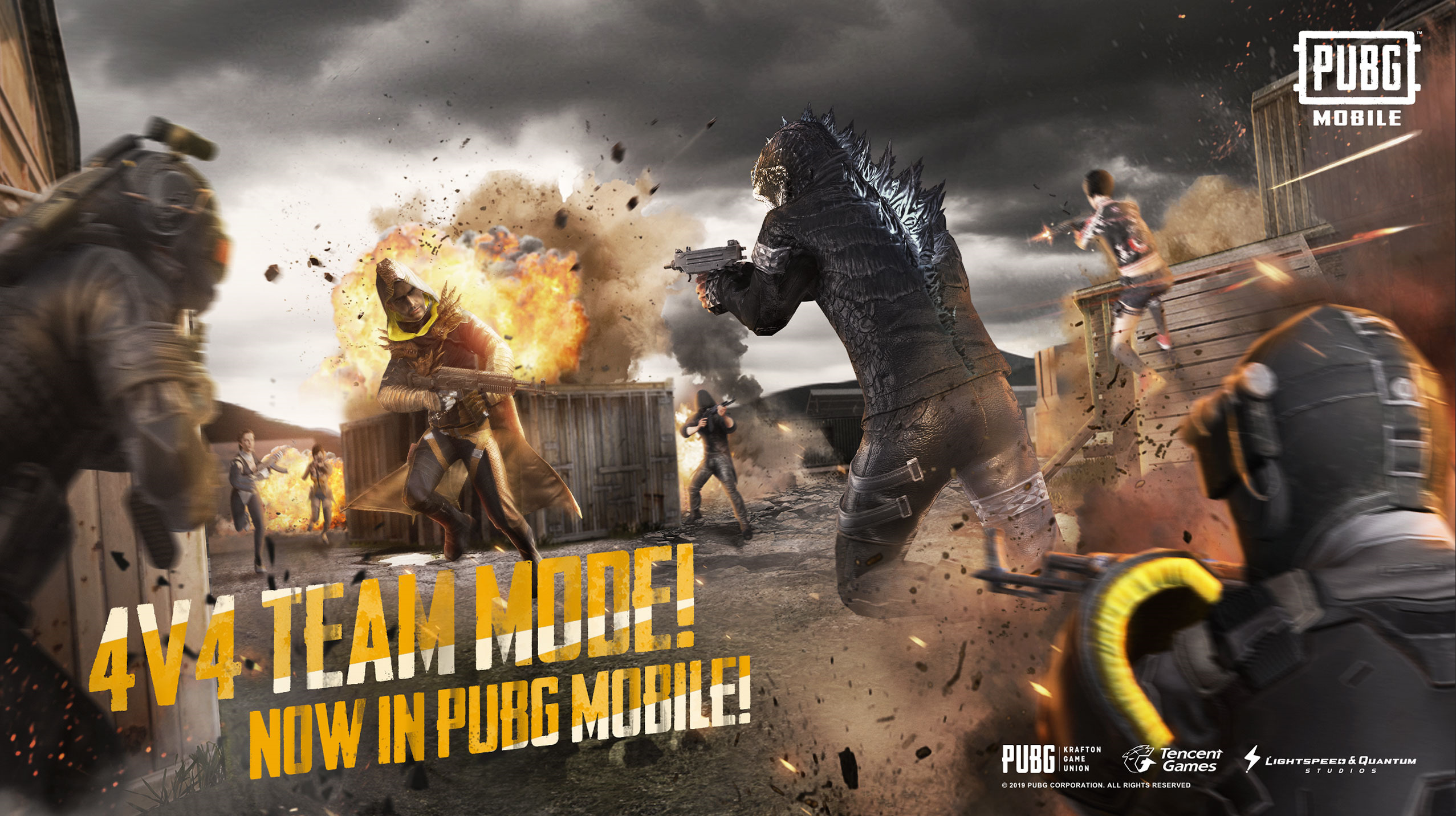 - Added Team Deathmatch mode to EvoGround. This new mode features fast-paced firefights in both FPP and TPP. Players can also create their own rooms with room cards
- Added control settings for FPP. Players can now have separate settings for TPP and FPP
- Upgraded 3rd party app prevention system and enhanced detection of cheating behavior via Virtual App, emulators and modifiers
- Added MVP showcase system at the end of each match. All players will receive a default MVP pose. The top 3 players in Classic mode or the MVP of the winning squad in TDM will be featured
- In Vikendi, players will now leave footprints, trails and tire tracks on snow
- Added a dedicated button for climbing that can be enabled in the settings
- When killed by friendly fire, now players can decide if the teammate should lose merit or not
- Added a Godzilla theme. Godzilla themed lobby background will be available together with many themed events and rewards after the update
- Added new popularity gift and ranking reward. Every week, the top 100 players in the list may collect the title All-time Popularity or Recent Popularity
- Added Charisma Ranking. The permanent outfits and firearm/vehicle finishes collected by a player will increase their Charisma
- New Achievements:
Victory Legion: Complete 1/5/10/20 matches with Dominating in Team Deathmatch
Alpha & Omega: Get the first kill and final blow in a Team Deathmatch
T-800: Achieve Terminator 1 time in Team Deathmatch
Envoy of War: Complete a series of missions in Team Deathmatch.

Other Improvements
- Survive Till Dawn and Darkest Night changes:
1. The old zombies have been replaced by 4 types of new zombies
2. Liquid Nitrogen Grenades now leave behind a cloud of freezing smoke on the ground for a long period after explosion, reducing the movement speed of any unit in the area
3. Added new mode combat modifiers
4. Certain zombies now have new abilities: Tanks will empower nearby allies; Skinners can slow nearby players
5. A new factory has replaced the police station

- Inventory improvements:
1. Players can now combine items in batches
2. Equipped items will be displayed on top
3. Duplicated new items will no longer be indicated by a red dot and the "new" tag
4. The Backpack and Helmet tabs have been moved to the Customization tab.

- Arcade mode opening times have been adjusted. Mondays and Wednesdays: Sniper Training & War; Tuesdays and Thursdays: Mini-Zone & Quick Match; Fridays to Sundays: All Arcade modes are available. All times are in UTC
- Protective items are now 25% more durable. Their effectiveness remains unchanged
- Players can now bolt/reload a bolt action rifle while moving instead of completing the process while aiming down sights
- Improved the animation in FPP when running while holding an SMG.
- Vehicles now have improved feedback on explosions
- Event Center now has improved interactions and better tutorials for the event missions
- Crew Challenge Qualifying Round has been expanded. Now 6 qualifying matches will be held every day, up from 5. Each squad can participate up to 3 matches per day, up from 2. Each squad is allowed to participate a total of 18 qualifying matches, up from 12. And new items have been added to the Crew Shop
- Players who have registered for Crew Challenge will now receive a notice 10 minutes before a match starts
- Players can now collect all rewards from daily missions, progress missions and achievements all at once
- Added 3 new Clan Insignias for Lv. 7, Lv. 9, and Lv. 10
- Added a latency indicator to the main screen. Green, yellow, and red represents a good, average, or bad connection